None of My Apple Gear Connects Together, Dammit

Here I am, out at a cafe, with nearly $4000 worth of the latest Apple hardware around me, and none of four fucking devices plug directly into each other. Even when they do, I can’t help but feel worse off using Apple’s own accessories and hardware today when than I did four years ago.

What is going on with Apple’s accessory ecosystem these days?

At a certain point, I had lost more screws in my old MacBook Pro than I had remaining. So when Apple dropped the long-awaited MacBook Pro updates in 2016, I figured I should probably bite the bullet:

gonna be weird to have a machine which still has half its screws in and isn't in danger of falling apart. gonna miss this dork tho, we did six continents and a couple dozen countries together. also, this is a nice metaphor happenin here.

I generally like my MacBook Pro. It could just be that my older one was falling apart, but the performance and form factor with their latest generation is pretty great, and it’s held up pretty well over the last few years, aside from a key that’s falling apart from all the the commands I must be giving it:

A lot of ink has been spilled regarding Apple’s rumored refocus on software quality, and thoughts on their hardware comes down to either “the Touch Bar is clearly dooming the entire company!”, or “AirPods are the greatest piece of engineering of all time!!!!1”. I’m more interested in talking about specifically their accessories: cables, chargers, and connectors. And all of this starts with the MacBook Pro’s choice to head to USB-C.

I really dig USB-C. I was fine being an early adopter where none of my shit worked and I had to carry an endless supply of dongles and adapters for awhile, because I’m into the long-term idea of getting the entire industry on one very capable standard.

The world of USB-C is still pretty wild; I’d guess maybe half of the adapters I order from Amazon straight-up don’t work because it’s a money grab for cheap-o Chinese manufacturers, who in turn don’t confirm to the spec correctly. I expect that from that shady underworld, but not from Apple.

And Apple’s capable of good stuff, of course. Nathan K, the intrepid Google engineer who has gained notoriety for reviewing USB-C cables accessories for quality, says that Apple’s USB-C charge cable is the best he’s ever seen. But from an end user perspective, the high-level approach of what Apple’s doing here is maddening.

The MacBook Pro drops all ports in favor of USB-C; great, I can get behind that. But it’s like they got into the Red Zone and decided to punt at the six yard line instead of taking the easy three points.

People oft-repeat the charge that Apple has released an iPhone that you can’t plug into its own laptops out-of-the-box, but it’s even worse than that. Here’s what I carry around:

Wireless charging is probably the way forward, although 1) it’s slow, and 2) “fast” charging is only available through some Qi chargers that have been blessed by Apple. Apple Watch Series 3 will have some Qi charging, but apparently that also depends on the charger.

All of this will be fixed for me whenever Apple manages to release AirPower, a long-delayed, possibly really expensive, multi-device charger that will charge all my things at once, provided I drop the money on AirPower, new AirPods, a new Apple Watch, and decide to bring the whole charging setup with me to a cafe. Then I’ll be set to slowly charge all my devices at once.

They didn’t even name the damn thing Apple Juice, either.

Skipping on both convenience and standards

Giving up some convenience for a standardized port makes sense. I really miss MagSafe, but was willing to move to USB-C Power Delivery for the speed and consistency in standard. But I’m not sure the trade off was worth it in practice.

I’ve been using Apple’s new charger for a year and a half now, and it’s generally worse than what we’ve had for the last decade. No MagSafe means that it frequently slides out of my MacBook Pro if I made a small adjustment. What’s worse, that can happen while it’s still physically in the port. The number of times I’ve gotten up to head out for work or a conference, only to realize I have a half-drained battery because the cabling had slid out just a little bit is just way too high.

What’s worse, I’m so damn angry at the cable itself. I like that it’s USB-C on both ends, so I can pop it out and use it to charge other devices (but not transfer data, because Apple’s charging cable doesn’t support that mode of Type-C at all, which is probably going to confuse so many people in the future). But the cable is much thicker than previous Apple laptop chargers, which makes it harder to wrap around something. And most egregious of all, there’s no pop-up cable wrapping helpers on the brick itself. 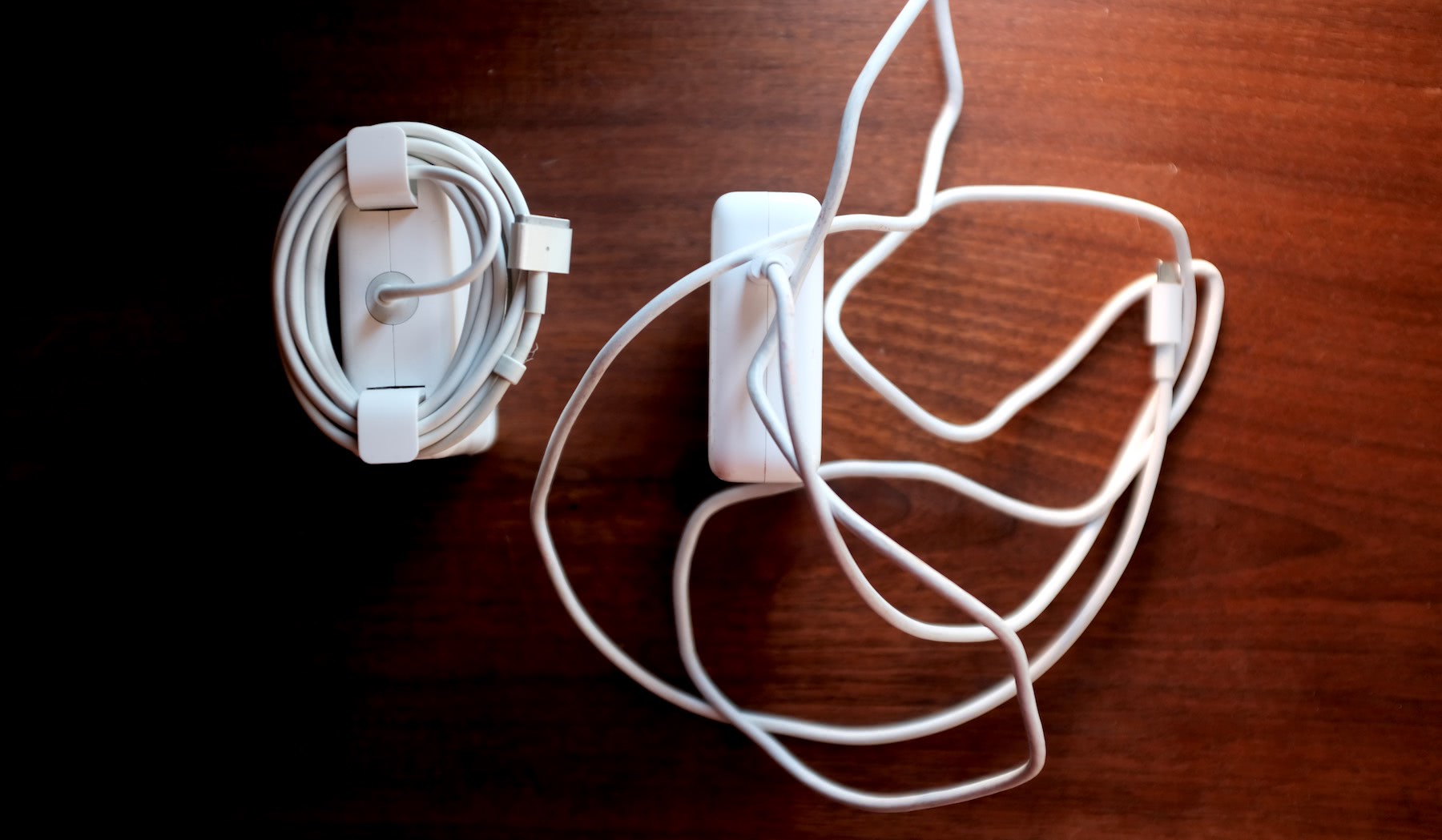 This means it’s become tricky to toss my charger into my bag without it becoming a goddamn mess, both when I put it in there, and especially when I pull it out. I know there was a concern with old power chargers of frayed cabling from people wrapping it too tightly around the cable wrappers, but those people are stupid anyway and probably put their fingers inside power sockets too.

The cable itself is so thick that it ends up tightly twisting in on itself pretty frequently, which likely isn’t great for the longevity of the cable anyways. At this point I’ve found it’s just best to shove the whole thing into my bag and hope for the best.

The other thing that really kills me is alright, Apple’s way forward is to buy all of their accessories, got it. But their own coverage of their own ecosystem is terrible:

All of this would be fixed if Apple fully embraced standards, but what Apple is doing is even worse than that: they force USB-C on their laptops, but they ignore components like an Apple Watch USB-C adapter at the same time they prevent third parties from building their own solutions.

So I still continue to bring my box of cables and chargers and adapters and shit every time I travel.

Part of this is sour grapes for being an early adopter, I know. I’m sure there’ll be hot takes about yet another Apple sucker getting their just rewards. I’m mostly just bummed that I’ve been buying into Apple’s future, but Apple themselves haven’t bought into their fucking future. It’s not even a matter of supporting two ecosystems while USB-C battles plays themselves out; it’s that Apple has just thrown their hands up and completely ignored these problems.

Which, to be fair, isn’t necessarily such a bad thing necessarily, but it’s a little hard to spend hours of keynotes patting themselves on the back for making such INNOVATIVE, ADVANCED PLATFORMS THAT WILL LAST FOR THE NEXT DECADE at the same time they ignore all this.

It seems like they’re asleep at the wheel, or, more likely, there’s no one team in charge of accessories and the ecosystem anymore at Apple. Like a committee came up with some broad thoughts for the next five years and expected teams to adapt to that whenever they’d like to. Which also again, isn’t necessarily out of the ordinary for most companies… but it doesn’t scream “Apple”.

It’s not new revolutionary iPhone technology we’re talking about there, either; it’s relatively cheap cables that have to conform to a standard. Wireless will probably be a thing at some point in time, but that’s a lot further way than a couple of USB-C ports today.

Anyway, none of this would have happened if Steve would have been there. Is that how I’m supposed to close this? Think that’s in the Apple gripes template somewhere.