Had a bit of free time yesterday on a particularly lazy Sunday, so I decided to tweet the president elect.

I was in a jovial mood and Trump was in a pissy mood so I thought I’d cheer him up by throwing him a bone (I assume he recharges his life force through absorption of internet hatred).

I spent the next few hours dealing with hundreds of replies from fervent Trump devotees and/or bots. Twenty four hours later, I’m still getting a handful of replies every ten minutes or so, along a with few more faves every thirty seconds or so.

@TheLionsDen80 i do, i look hot af

There’s a few things I found amusing and tepidly surprising about all of this.

Twitter’s threading has an impact

This was the first mild surprise. I made a smarmy toot at the future leader of the free world and apparently that got a lot of people riled up. So far I’ve gotten 600 faves on the first tweet, and on some of the replies I’ve gotten even more: 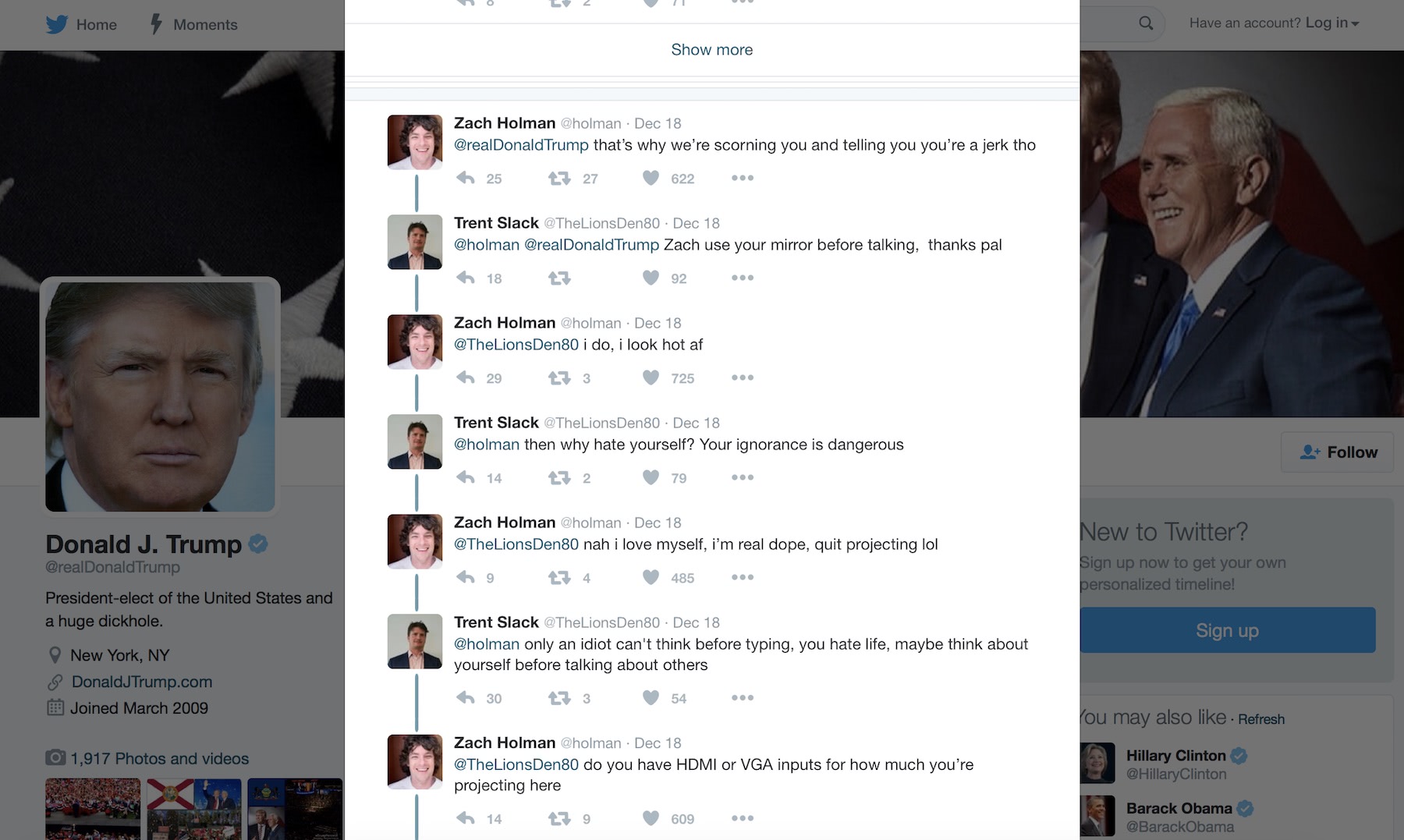 Right now I’m the third “thread” in the replies to the original tweet on twitter.com. That’s a ton of additional exposure for my original tweet and, in my case, seven additional tweets from a dialogue I had with some white dude who joined Twitter in November 2016.

This generates a ton of extra faves and replies, to the point of being alarming; if you’re just trying to blow off steam and drunktweet dear ol’ Donny and your tweet gets in the main threading, then you could have a lotta grumpy people yelling at you. The internet is small. And big. Somehow at the same time.

These people are grumpy

From what I can tell, most of the people who reply to replies on Donald Trump’s tweets almost exclusively use Twitter for this purpose. There was a fair amount of bot-style anonymous users who would jump in — on both sides — but there was also a lot of people with only one or two tweets on their account that weren’t in reply to something else.

I did get called a few names; libtard is real hot right now, as is jerk and idiot. cuck seems to be on the decline. I was not called any sexist names or racist names because I’m playing life on white male easy mode. Had I been representing as a woman, this would have been a different and not at all mildly amusing lazy Sunday experiment. Even in easy mode, I did get a couple death/well-being threats, so yeah, neat I guess.

lol yeah there’s not really a real approach you can take to have a discussion here, from what I could tell. I took a few different approaches to replies to my tweet, but most of them held at least the possibility of having a kind of rational debate, but the closest I got was mostly getting yelled at every five minutes for two hours (although at the end I did wish her happy holidays and a good night and she wished me merry christmas and that thank god we’re free unlike the far east, which I graciously credit her with half a point for it).

I have 40,000 followers (and am Verified™, whatever that means), so I think that also put a different target on me. I did reply to a whole ton of the replies to my tweet, and I was kind of amused how many times an account would tweet once at me and never respond back, even after I asked them a clarifying question. I think we’re used to people with a “following” online to not really interact back with you, and as such it’s fairly easy to just push bile out into the void to make yourself feel better. Then again, they’ll do that anyway, so what do I know.

Anyway I don’t really have a ton of amazing takeaways from this; just thought it was interesting. I was in the right mindset to tackle discussions and hatred, and if you’re in the right mindset, go for it; it does give you a context on The Other Twitter™ that honestly, I don’t get from my normal Twitter timeline. If you’re not in the right mindset, though, run off and hide; even if it’s all fun and games, your thick skin can feel thinner when you have hundreds of people yelling at you, unfortunately, and getting caught in their fervor sucks.

Anyway, in light of not having an impressive takeaway from this post, I just wanted to end with what I consider to be my best comeback of all time in any medium. Happy holidays.