How to Start Up Your First Startup

It turns out that I’m starting a new company.

This is odd, because I haven’t started a company before, and spoiler alert: everything about starting a company is fucking weird and foreign and strange and nonsensical, at least as a first-time founder.

I’m planning on digging into a lot of early-company concerns in future posts as I go through them — I have a lot of things to say about fundraising, and finding cofounders, and building an initial product, and all this other junk — but for today let’s take a small piece of the pie: the actual mechanics of starting a company.

Naming things, or: one of the two hard problems in computer science

So cache invalidation is stupid because you haven’t started coding yet and pffffft your code is fire af anyway and you don’t need to worry about fancy computer sciencey things like caches.

That leaves naming things, and goddamn, naming things is harrrrrd. Especially something that could be with you for years and years. For example, I spent five years of my life dealing with people saying “gith-ub” instead of “git-hub”, and spelling it “Github” instead of “GitHub”, and I HAVE LOTS OF PENT-UP RAGE ABOUT ALL THIS AND I WANT TO AVOID THIS FOR MY OWN STARTUP AND GAHHHHHHH

So like everyone, I’m really shit at naming things, so my approach was to kick the can down the road. My initial name for my project was Lorne. I chose this for two reasons:

The second part is important: I’ve been on teams before where our informal codename for the product ended up being the public name, because it was “good enough” or people were simply too lazy to come up with a new one. Another approach I’ve taken instead of going the ugly route is to pick the definitely-not-legal route. For example, one of my codenames early on for a different project that never shipped was Arby’s, literally named after the delicious fast food joint. Try naming your next project Starbucks, or Microsoft, or The New York Stock Exchange, and you’ll have built-in legal motivation to change it.

During my naming process

So I’ve been burying the lede up until now, either because I didn’t want to be smarmy (true) or I’m keeping the company in SUPER SECRET STEALTH MODE, which sounds cooler if you’re trying to create that all-elusive RED-HOT STARTUP EXCITEMENT. But yeah, the company name I ended up incorporating as is: During, Inc.

I’m pretty pleased with this for a few reasons:

How did I get to During? With a long, long list. Seriously, just start making a long list of things that either might be a good name, or sort of describe the area you’re looking to be in. Then I started making a list of suffixes or adjectives that I liked, with the thought being that a good domain name would cost a bajillion dollars and I might need to differentiate it. Then I made a list of other company names that I either liked or found interesting (For example: I saw Potaito Boards in an indie craft fair in San Francisco and, though I’m not in the skateboard business, I thought Potaito was interesting.)

I spent like four months doing this, casually, off-and-on. Then I just chugged down the list and typed it into domain registrars. You can also take a look at domain auction sites like Sedo or Flippa. I spent a few weeks doing this before I ended up finding during.com on Flippa. And because I’m sure you’ll ask, and because it’s public anyway, my auction is here: I picked it up for $15k, which feels pretty solid for a short, one-word English .com related to my product.

All in all, my advice here is: naming a company sucks, and as soon as you get to something that you don’t hate and that a few friends around you don’t hate, jump on it.

Now that I had a name, I wanted to go ahead and make it official.

I ended up using Stripe Atlas to handle most of the nitty-gritty of incorporation and opening a bank account at Silicon Valley Bank. So here’s a sort of review of Stripe Atlas, if you will.

I’m not quite the target customer for Atlas, since I’m based in San Francisco and, say, opening a bank account at SVB is a little easier for me than someone in Indonesia. But I decided to try it out for two reasons: 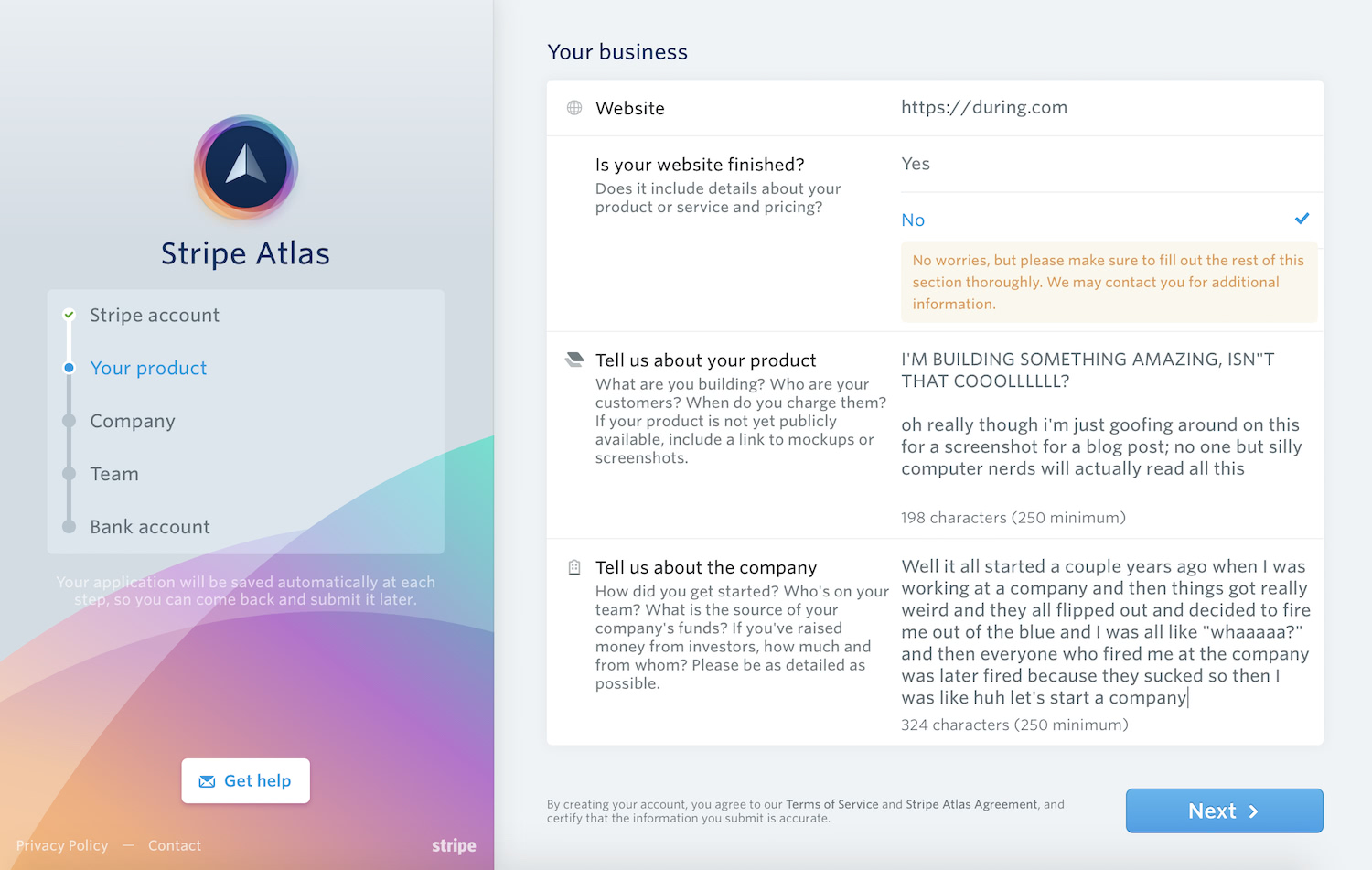 The process was pretty straightforward. Apply for an invite, sign up with a straightforward, 15-20 minute signup form, and wait a few weeks. The first few steps happen real quick, because Stripe is a real company that doesn’t suck, and the last few steps take a couple weeks, because the IRS and SVB both kind of experience various levels of suck. My EIN in particular took about a month to go through the wheels of the IRS and slowly filter down through Silicon Bank’s relatively clumsy organization.

After I was situated with Stripe Atlas, I did end up finding a San Francisco-based law firm focusing on startup law to supplement Atlas. I sent them my Atlas incorporation documents, they got a little more information from me, and I was basically done there as well.

This meant I somewhat overlapped early on with incorporation between Atlas and my lawyers, but I found it to be pretty reasonable. I think for the majority of startups, particularly outside of the Valley, Atlas is going to be just fine, at least for the first six to twelve months.

There are some other additional benefits, too: $15k in credit with AWS, and a private discussion forum with other Atlas entrepreneurs. I’m hoping they add more to both of these aspects in the future… I think Atlas could be pretty interesting in terms of a “non-accelerator accelerator”; basically like a Y Combinator, except without giving up equity and jumping on the VC treadmill.

Something to help you during the future

Okay I don’t really have anything else; I’m just getting used to all these sentences I can use with during. More to come, but until then I should probably like, go back to building something instead of just talking about it. Which is a big no-no in Silicon Valley, of course, but what do they know.